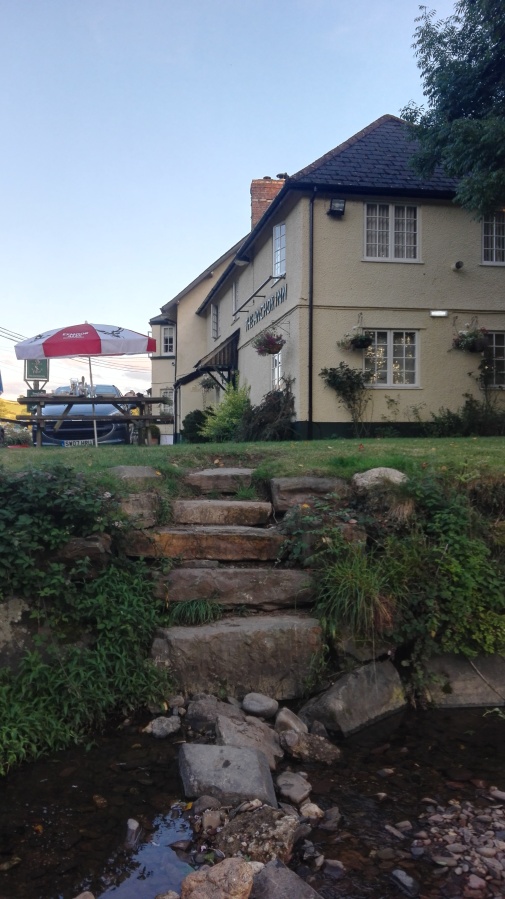 It was a flying visit to Exmoor, but long enough to establish that any tourists there were could be found walking to the Tarr Steps.

I’m joking of course, no-one walks that far these days, and there are killer snakes out there.

Actually, they were all looking for the lone open pub; that turned out to be just down the road from our caravan site in Dulverton. Fantastic views nearby,

but it felt like a ghost town on Bank Holiday Saturday.  Approaching from the north we found the Rock House, a basic gem of old, looking very closed.

The houses nearby were by far the highlight of a town that seemed to have lost the life I recalled from my last visit.  Mrs RM attempted to boost the local economy at the local Farmers Market, but was brusquely told they were closing.  A theme emerges.

The Bridge Inn was the busiest place in town, by virtue of being open (WhatPub tells me the other two survivors were also 12-3).  It was also committing the crime of providing food at 4pm to dozens of interlopers.  A decent riverside pub, though the Exmoor was served in one of those abhorrent octagonal glasses, and very watery (NBSS 2.5).

Back at our Caravan site, we chanced a pint at the Anchor Inn at Exebridge, not in the Beer Guide but offering Abbot and a 60’s disco.

We managed to avoid the disco (there were people in kaftans !!! *), but succumbed to Bury St Edmunds’s finest.  At least they weren’t trying to offload IPA.

It was amazingly good (NBSS 4), and the Exmoor was also far better than usual.  Cool,full bodies and with a tight head. The pub’s riverside garden was packed with drinkers, a fair few drinking the real ale.  The food was average pub fayre, but at least the tables were kept clean.  As with everywhere in Exmoor, every table had at least two dogs tied to it.

To be fair I’ve had decent Abbot in a Wetherspoons recently (Caernarfon), but this was the evidence that a tight beer range, decent cellarmanship and a few customers can deliver good beer whoever brews it.  The Anchor is in a hamlet on the Devon/Somerset border, and I suspect November sees it scarily quiet.

* for the benefit of Mr Irvin

8 thoughts on “EXEBRIDGE & THE CASE FOR ABBOT”