There used to be a number of places you could rely on being Beer Guide entry free; Letchworth, Port Talbot, Coatbridge. Then along came Wetherspoons and ruined it for everyone.

Shrewsbury and West Shropshire CAMRA doesn’t have a large allocation in the Guide anyway, and the largely rural area up to Whitchurch remains resolutely untouristy. But the lack of a GBG entry in Ellesmere until now still has the power to surprise. 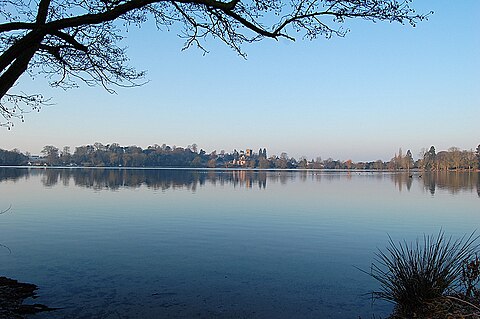 Ellesmere gets plenty of visitors, either starting canal boat holidays or visiting the Mere.

Careful photo selection might convince you this is an underrated gem. There are modest hills from the main square down to the canal and the Mere, and plenty of the black and white buildings that tourists love.

And the Mere itself is a delight to explore, with gardens, boats and the sound of the UK’s worst karaoke version of “I just called to say I loved you” drifting over the water .

Pub tourists, if such a thing exists, will be impressed by some proper windows and some classic nostalgia.

I like basic places, but Ellesmere will come as a shock if you’ve just been in Shrewsbury, or Oswestry.  The main square is a vast car park, surrounded by large pubs seemingly unchanged in 30 years. It looks, appropriately, like one of Norfolk’s very ordinary small Broads towns.

It’s too small for a Brunning & Price or Spoons, but the half-dozen remaining pubs are surprisingly un-foody, the Red Lion apart. Traditional beer ranges too – lovers of Thwaites ,Tetley, Marstons, Doom Bar and Bombardier should head there now.

The White Hart is the new entry, and rightly so, even if the interior is nothing like the glorious frontage below would suggest. The WhatPub  description makes it clear what local CAMRA think ;

The White Hart has Salopian, Purple Moose and Rowton (Mild, NBSS 3) at bargain prices in a quiet pub clearly used as a local by all ages.

It was encouraging to find a town with so many wet-led pubs, even if they could do with a touch of paint.  In years to come there might even be a Boring Brown Bitter tourist trail .