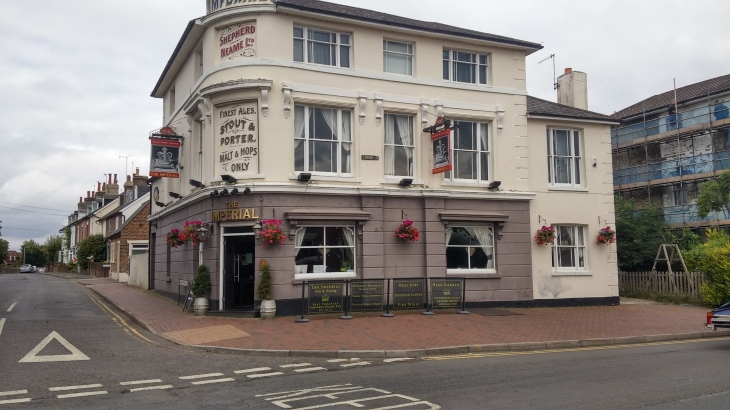 It’s only in the last few years that our regular trips to the in-laws have become bearable.  By that, I mean of course the pubs in Tunbridge Wells have improved, as Paul Bailey has reported recently.

Little Southborough isn’t Tunbridge Wells though.  What it gains in views over the Weald it loses in terms of any real retail or pub scene.  A real dormitory/retirement village. Home security systems are a higher priority than hops in the beer.

We took our in-laws on a stiff walk around the Common and the famous cricket ground to work up a thirst for a pint.  The Weald of Kent has some of our best walking; well-signposted, occasionally challenging, soft underground and with wonderful views.

The in-laws lasted an hour before bringing out the toilet card (as it were) to call the walk short. I was quite happy, slow walking is harder than running.

The Imperial is Shepherd Neame’s tenanted Pub of the Year.  It’s also the only real pub in a town of 11,000, if I exclude the Hand & Sceptre “Dining with Rooms” monstrosity (and WhatPub seems to).  The rambling old Weavers is currently closed, the one-time GBG Bat & Ball long since changed from a quirky alehouse to a Chinese restaurant. Perhaps Leominster isn’t doing that badly.

I can only assume that the Shep’s award is for the introduction of an unobtrusive Italian catering operation into the pub.  WhatPub is fair to say it hasn’t lost its local character, though the number of children in the pub at 4pm on Wednesday would be an issue for some. A rather plain interior, but at least unfussy.

Very South-East London in feel, with cheerful old boys at the bar and a bloke with a laptop doing a beer blog. All the seating was around the wall, and conducive to a decent session. Some younger lads came in later on, and the atmosphere was very welcoming.  Fans of 1980s europop are particularly well catered for; I’d forgotten how ubiquitous Jimmy Sommerville’s 70s covers were 30 years ago.

What really struck me was how little real ale was being sold.  Four slightly different lagers (Asahi, Hurlingham, Orangeboom and Sam Adams).  I’ve never tried any of those.

My in-laws are moderate drinkers, but always go for the real stuff on their occasional pub visits. Spitfire (NBSS 3) and the Bay (NBSS 2.5) were cool, which is worth a mention.  My father-in-law would opt for Harveys given the choice, but was blown away by the craft in Fuggles in the Wells, as youngsters call it.

A craft keg would have suited us, but that’s not really Shep’s way. I did come across a Samuel Adams branded cask beer near Tenterden, but it was very dull.

Back to the in-laws for gin and cake afterwards.

If only I could persuade Paul to set up an off-licence/micropub there.

13 thoughts on “THE IMPERIAL, SOUTHBOROUGH”