Munchberg sounds more exciting than it is, but it’s still a lovely slice of rural Germany, with the usual pale colours, cobbled streets and manicured gardens you’d expect.  It makes attractive use of the tiny river running through. 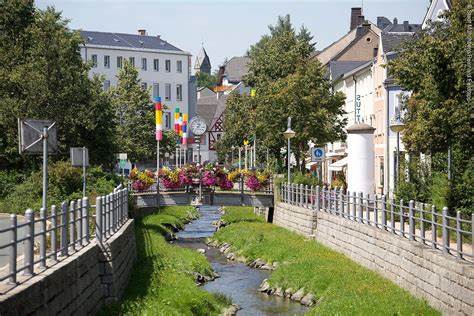 Our hotel, the Braunschweiger Hof (top and below), looks like the only place in town, and reminds me of the sort of lodging you end up in the Welsh Marches in the absence of Travelodges or high-end places. It’s very clean and simple but wifi is stuck in 1974.

At least Presteigne or Knighton in 1974 would have had some life at 9pm on  a Saturday night in 1974; Munchberg was terrifyingly quiet.  The one takeaway option was long closed, as was (mystifyingly) our hotel.  Friday had been full of diners.

The handful of bars seemed to be pizzerias as well; culinary options are a little limited in the northern tip of Bavaria.

I popped in a little corner pub with the sort of restrained atmosphere you still get in the Marches; basic, unmodernised, homely touches and a small group of regulars looking at me suspiciously.

The bench seating contrasted sharply with the flashing games machine, and a chair seemingly designed to look like a “Scream” mask.

I had a Pils from Schlossbrauerei (Euros 2.20 for 0.5l) that will feature in no guide to Franconian beer, but was very smooth and Becks-like. The one-item menu attached to a candle was a novel feature.

One quick beer was enough, but as I headed for the door, one of the stern-faced locals instructed me to sit down, and marked his card to buy me another Pils (strangely, he was sticking firmly to the bottles). Quickly establishing that we both spoke only the one language, the lady of the house was summoned to interpret.

I can at least confirm that a) Germans think our beer is all warm, b) nearby Hof is aloof and c ) the free paprika crisps are addictive. It was a good evening.

2 thoughts on “FINDING LIFE IN MUNCHBERG”