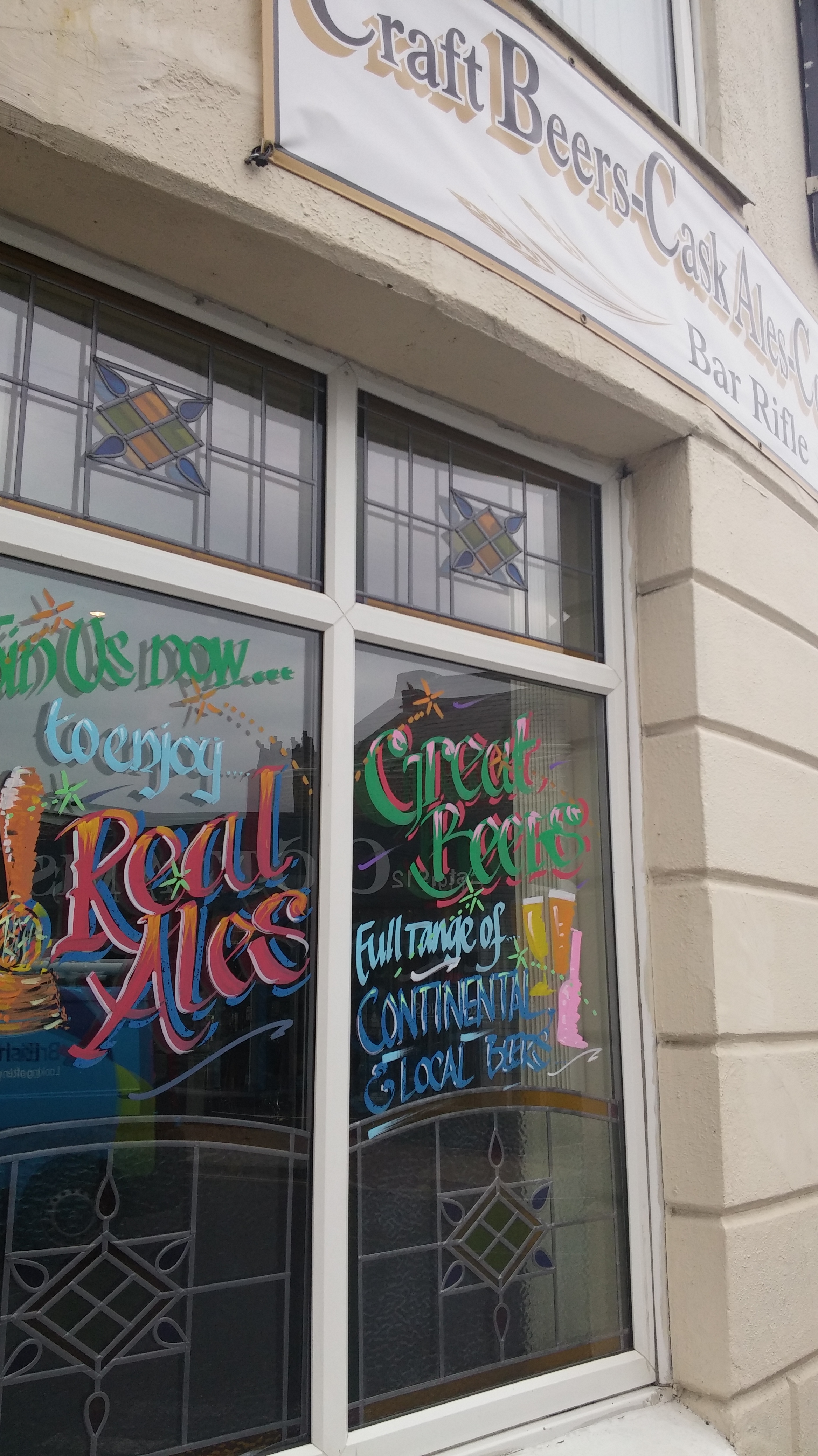 There’s a lively debate at the moment about the purpose of CAMRA.  Pub Curmudgeon covers it well on his blog  e.g. here. Most of the discussion leaves me cold.

My own perspective is that local CAMRA branches do a vital job in promoting quality real ale by surveying and promoting pubs, resulting in the Good Beer Guide and other local publications. Just as importantly, branches can encourage locals and the odd visitor into pubs.  That’s essential to increase cask turnover and quality as well as pub viability.

St Helens branch has been very active in promoting its own pubs, mirroring the energy and enthusiasm seen in Stockport CAMRA. Their excellent website has some simple, up-to-date pub maps, always a good sign.

So I was thrilled to see three new Guide entries this year, and had been saving them for a special occasion.  The end of four days sorting through ladies undergarments for the charity sale was that special occasion.

The jovial ticket seller at Salford Central was intrigued by my cheap day return to St Helens. “I sold a ticket to there to a lady yesterday.  Are you meeting her ?“.  I can assure Mrs RM I wasn’t.  Two tickets in two days suggests St Helens isn’t a tourist destination, even from Salford.

My journey via Wigan took so long I just missed the Glass Museum (again), but luckily the nice people at the Town Hall let me have a look at their tiling.  I have a reputation to maintain.

It’s the new architecture that impresses in St Helens though.  The railway station is a vast improvement, and a short walk towards the civic building takes in The Needle, which isn’t going to compete with the hill-top Dream, but not much does.

The town centre is honest rather than outstanding, a bit like Warrington without Palmyra Square.  St Helens is really about the rugby, glass and pubs, and the pubs are now as good as I’ve seen them.

When I first visited with Mrs RM in 1993, we didn’t take to the place at all. Obnoxious Premier Lodge staff, poor takeaways, and a sea of Greenalls and karaoke.

The last few years have seen a couple of free houses that would impress anywhere (one will feature tomorrow), and a lot of more ordinary pubs that have converted to real ale, or to quality real ale.

The Sefton is a Stonegate pub, a bit like a cheap and cheerier Ember.  A very decent Wainwright (following the lead of the previous buyer) was probably not the beer of choice for a largely male crowd at 4pm, but the well known beer range was probably ensuring a decent turnover.

Even better was the similarly opened-out Market Tavern, a street away. Amber Taverns clearly target a similar audience, though without food. Again cheery and chatty, even over a backdrop of Nu Metal and Sugar Mynott.

The John Smiths Smooth above was the beer of choice, which made the quality of the Unicorn (NBSS 4) a pleasant surprise. That looks a good but ambitious range to me, but £2 a pint was clearly shifting the beer.

Pausing only to admire the glitter ball over a coffee in the Spoons, I then headed down Duke Street, which is probably a success story to rival Wellington Road North in Stockport or Baker Street in Middlesbrough. 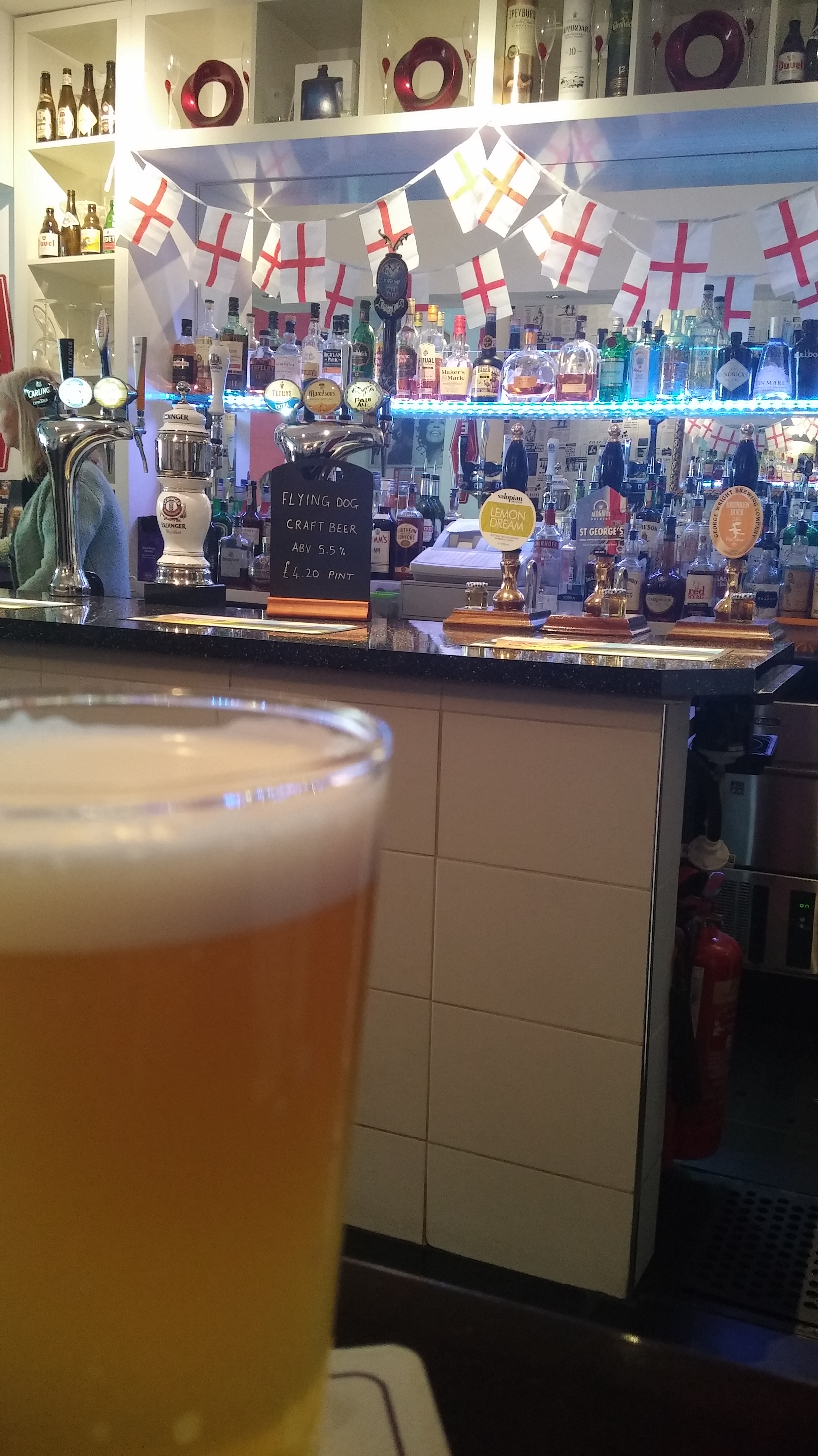 The News Room is one of a number of unlikely looking real ale venues, with wine and lager sales propping up an innovative beer range, among which the Allgates seasonal was again superb (NBSS 3.5). I don’t like the high tables, but I loved the place. I’ll let others fuss about whether this is a micro pub or not.

Three very deserving new entries to complement the Turks Head, Cricketers and Phoenix in the centre.

Duke Street looked like great Stagger potential.  I passed a number of places with a sole beer on, which makes a lot more sense than having five pumps with stale beer.

4 thoughts on “CAMPAIGNING FOR ST HELENS”