Apart from the Cambridge Blue and the historic Eagle, the Wrestlers is Cambridge’s perhaps best known pub.  Certainly for visitors to the Abbey Stadium it was the default pre-match pint following the loss of most of the Newmarket Road locals.  It seems to have lost that status since the latest “improvements” turned it into a restaurant.

Oddly, until that refurb, the Wrestlers was one of the town’s most authentic boozers.  The Charles Wells range would have been considered enticing by most CAMRA branches in the ’90s, with Bombardier and Broadside supplemented by some more interesting guests.

The excellent Thai food was very much an add-on to the pub, and it wasn’t unusual to see a certain famed United manager eating his curry at the bar. Pre-2007, if you called in after 9pm you’d always see a few locals drinking Guinness and Red Stripe at the bar.

Charles Wells saw the potential to boost food sales, with the pool table and brilliant jukebox being stripped out in the ’90s to make space, and then a rather scruffy pub getting an oriental makeover, complete with quotations from Bedford on the walls.

To be fair, the business strategy worked. Wetherspoons apart, this is the only Cambridge pub you will always find packed.  Lunchtime office trade and evening post-shopping business keep the kitchen and the handpumps working.

I’ve mentioned before the consistency of Cambridge beer, with even its most marginal outlets able to produce a drinkable pint.  Mrs RM tested pints of Directors and a Brains seasonal on Thursday lunchtime, rating them good to very good.  I trust her judgement.

The one thing I didn’t see, oddly, on the bar was Bombardier, a beer served here at it’s best in the ’90s. Eagle IPA never convinces, and the Broadside or Hook Norton seemed the most popular among the cask drinkers.

Mrs RM and I rate the Pad Thai at the Wrestlers highly, and this is still one of the best beer and curry combinations anywhere, but not a place for a pint and banter. 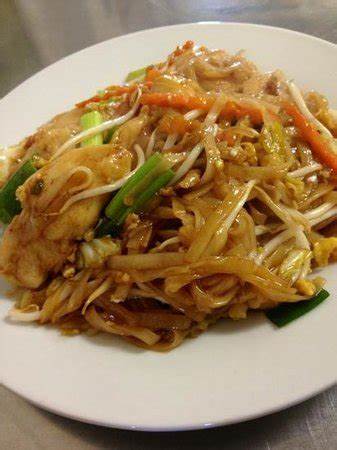 2 thoughts on “THE WRESTLERS – PAD THAI, PUMPS, BUT NO POOL”