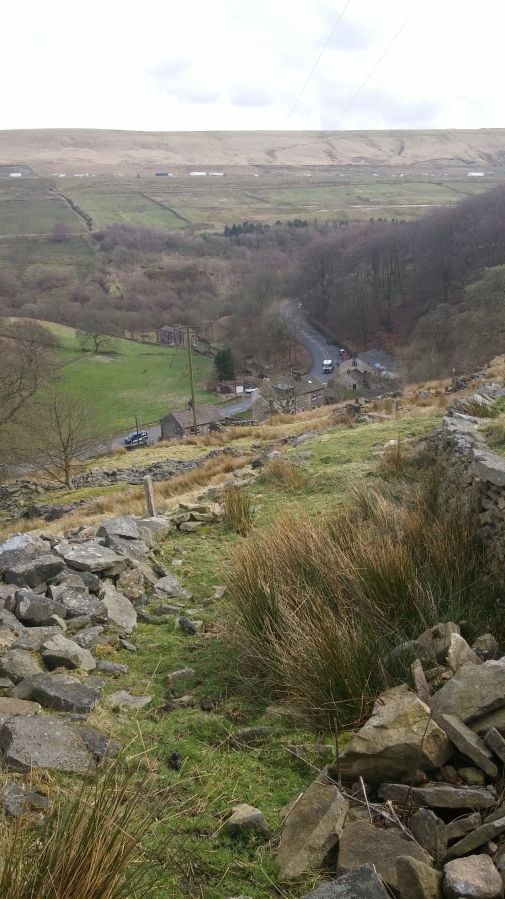 My last pub in the West Yorkshire chapter of this years Beer Guide was in Rishworth. It must have the best views of any pub in the county, obviously apart from the Steam Packet in Knottingley.

Just like Scott following Amundsen, Simon Everitt got here first on his way to finishing the county. Mind, I first completed West Yorks a decade ago when pubs up there still sold Tetley.

Rishworth is a difficult place to describe, geographically.  The pub website says Halifax (which makes Halifax enormous), WhatPub says Sowerby Bridge, but it feels to me like the very edge of Ripponden. You approach here with Saddleworth to your left, placing this firmly on the Lancs/Yorks border.

The Booth Wood Inn is one of a number of smart looking pubs in the area, with limited but comfortable seating for drinkers.

I think this is the view from the very (smart leather) seat Simon sat in, but I couldn’t see his famed BRAPA calling card. Ignoring the siren call of the Bradfield, I had a half of Holts Bitter (NBSS 3). Holts is an odd beer to find in smart Yorkshire, particularly when it costs more than the guest beer.  The folk discussing musical notation and oboe lessons were noticeably avoiding the real ales altogether.

A combination of the Holts, an unpretentious menu with £5 lunches, and overall pleasantness makes this stand out, though a few miles the either side of the M62 you’re in Delph and Diggle, which win every time.

Unlike Simon, I did the walk, a mildly strenuous 90 minute trip around the village culminating in a calamitous slide down the hill back to the pub, eyed by creatures with horns and sheep. It’s not a walk I’d have fancied in the snow which was lightly covering the Moor on Saturday night.

I didn’t pass many walkers, but plenty of cyclists, with Tour de France ephemera still attached to many pubs. Take it down now please.

I declare my favourite West Yorkshire pub the Cross Keys in Siddal, one of Halifax’s many suburbs.  Halifax pips Huddersfield on beer quality for me, which is saying something. Walking to the county’s pubs from the station or Premier Inn is one of life’s great pleasures.