Not sure about the beaches. Joseph, but Torbay has some decent beer and cake, which I rate as rather more important.

Having never been to Paignton or Brixham before the weekend I had an image of an upmarket beach resort and marina in my mind. Instead I found fun pubs and rugged coastal paths, which isn’t a bad combination.

Starting my walk at Southdown Cliff, the coastal path is pleasant rather than stretching, but by the time I reached the Berry Head Fort two hours later I deserved my banana and walnut cake in as good a café as I’ve found outside of the Calf of Man.

The 700 odd calories (it served as tea as well) rather slowed down my descent to the harbour, and wasn’t a particularly sensible base for a series of pubs on the way back to Paignton. 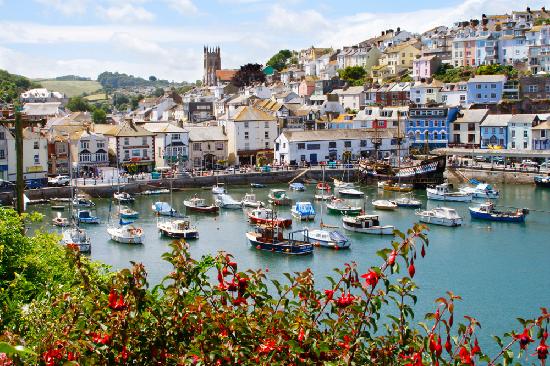 Brixham is an attractive oddity.  I expected something like Salcombe, but what I found was more Whitby on a smaller scale. There’s an attractive crescent of pubs, cafes and tat shops around the harbour, and very steep lanes leading up to colourful houses and pubs.

The pubs looked pleasingly basic.  The most traditional one I saw is also the Guide entry, the Queen’s Arms. Proper seating, wood panelling and Branscombe Branoc (NBSS 3); a good place for blokes who like rugby on TV.

The Vigilance is a standard Wetherspoons with above average beer, Vale’s festival IPA Punk is Dead being the best beer I’ve had from them (NBSS 3.5). The nearby street art is unexpected, although the pub next to the Spoons is genuinely intimidating.

Back in Paignton, I found a more modern seaside town than expected.  Colourful hotels along the front,  a long arcade of seaside pubs, several rows of pleasant looking B&Bs and a tiny bit of Victoriana near the church.

Paignton felt more like Whitley Bay than Eastbourne, and there’s nothing wrong with that. Henry’s Bar might be the best fun pub in the Beer Guide.

In the same vein as Blackpool’s Rose & Crown, but with a bit more gloss, Henry’s is the sort of pub holidaymakers would go back to every night.  With beers near to the neighbouring Wetherspoon prices, but a more convivial setting, I’d do the same.

The excellent beer and service continued to the Isaac Merritt, the Spoons in the Beer Guide.  It’s of their standard ’90s shop conversions, of note only for the manager popping over to ask me what I thought of his beer (half of Otter Fusion, NBSS 3.5%).

Paington was a cheerful, cheering place, with plenty of live music coming out of the lively pubs too.

That piece of banana cake meant no Chinese takeaway, despite excellent recommendation from Punxvillian (Rickshaw Boy). Breakfast in the Carrington Guest House was superb too.