Four seasons in one day yesterday, but sunny enough for an hour in one of Northants many unsung towns while my youngest son spent my chinese takeaway budget on skateparks.

Towcester is, of course, best known for the traffic chaos on the A5 that scars an otherwise pleasant small town, even on the 350 days without horse racing. Wiki says it’s affluent, on account of the Waitrose presumably, but quite what that makes Standish I couldn’t say. Aldi is the new Waitrose anyway.

It’s a place to refuel on the way to Canons Ashby or Stowe, or, at a pinch, walk to from your canal boat on the Grand Union.

A walk down the main street presents a handful of black and white buildings, Northants stone buildings, a good parish church, and what passes for a castle mound (even smaller than Cambridge’s hill). 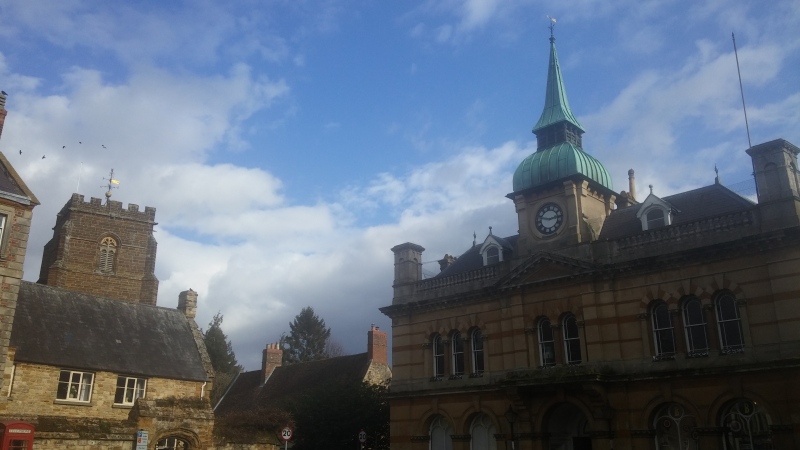 The Towcester Mill Brewery Tap is worth the trip. There’s plenty of pubs along old Watling Street, but only a Charles Wells house has graced the Beer Guide in 20 years.

I do remember a particularly characterful S&N pub that complemented its traditional folk sessions with Old Peculiar with some fondness though, presumably because Mrs RM was pregnant and therefore driving at the time.

The Tap looks the busiest pub in town too, a mixed crowd filling most tables in part of the converted mill overlooked by the tiny castle mound. With evening only opening from September (another irritating change to GBG hours) it’s busiest at weekends, when TV sport and other events are staged.

It’s a little bit modern micropub for my tastes; I prefer bigger multi-roomed pubs, though I suppose I could have had the function room all to myself.

From a large range on draft, the Dark beer is excellent (NBSS 3.5).  It’s the only time I’ve seen their beers, with a dearth of free houses round here. The George a few miles north at Tiffield is the best bet for interesting beer.

Towcester has grown rapidly over the last few decades, and coupled with a possible bypass that expansion might well bring more options to the town.  NB It’s pronounced Toaster, by the way (thanks to Michael Harris).

The highlight of any trip to Towcester is Brixworth pate at Elliotts Deli; so the person who bought the day’s remaining stocks just before I tipped up should be ashamed of himself.