Rotherham, like Doncaster, has had bad press over the last decade because of the activities of a few of its citizens.  They’re two of the friendliest places in the UK though, and each with quite a bit to commend a visit.  Fans of Wetherspoons and Social Clubs will be particularly impressed.

In my last job two colleagues were from Rotherham, which furled a fascination of its diverse suburbs.  Greasborough and Rotherham are a few miles apart but different worlds.  Actually my Cambridge workplace had folk from York, Scarborough and Grimsby as well, which tells you quite a bit about migration patterns of Yorkshire & Humberside finance professionals.

The presence of Meadowhall has had almost as much impact on Rotherham as the closure of its foundries, taking much of the life from a large town centre.  We’ve visited several times over the years, drawn more by the excellent country parks at Kiveton and Rother Valley, and the excellent if cold MAGNA.

I wouldn’t claim it’s an architectural masterpiece, but the riverside is increasingly interesting though given over to civic  buildings. All Saints is a stunning church, and the Chapel on the Bridge an interesting quirk.  The Crofts, home to Spoon’s Bluecoat, is perhaps the most attractive street.

I still don’t see much of an independent scene (tattoo shops apart), but a bit of street art off Westgate had potential. 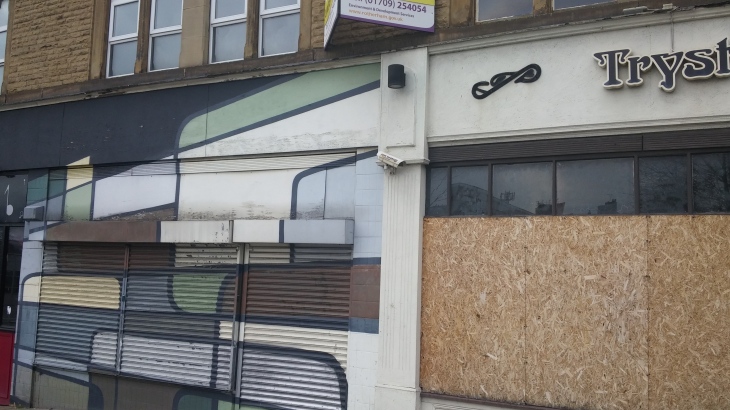 Until recently the pub scene was disappointing too, after a highpoint in the ’90s when some really basic but classic pubs like the Moulders Arms and the Woodman made a trip to Millmoor a classic football away day.

The town may be about to become a left field classic pub town though, particularly if it can follow Mansfield with a micro-pub or two.  Right outside the station you get a beautiful juxtaposition of the Bridge Inn and the Trades Club. Astonishingly, it’s the Bridge’s excellent Old Mill beers I rated higher on my last trip.

The real gems are five minutes down Corporation Street into Westgate, now worth a journey from anywhere in the world.

Sadly, the first gem has been closed since a 2012 fire, but the Alma was an architectural gem with rubbish beer when I did visit.

Very much alive, and with fantastic beer, are the two pubs supplied by Chantry Brewery.  The newly-refurbished Cutlers Arms is remarkable, as I hope the photos show,

It has the feel of one of Stockport’s wonderful Sam Smiths houses, albeit with an expanded beer range (for better or worse).  Beer quality was very good (NBSS 3.5) on a quietish lunchtime, and £1.25 a half almost Sam’s value.  I’ll be back soon.

Just as good is the New York Tavern, which shares its name with the area and the new football ground.

You can readmore about Rotherham pub-crawling on Simon Everitt’s blog.

The best traditional pub in the area used to be the Prince of Wales in Greasborough, which I mentioned here. Updates on that welcome.

2 thoughts on “ROTHERHAM’S CHANTRY – THE KING OF NEW YORK”