Just occasionally I have to spend a day at home, so I had no reason not to finally get to the local CAMRA branch meeting last night.

I’ve no excuse for non-attendance, apart from rarely being around on meeting nights, and having something of a blind spot where Beer Festivals and breweries are concerned. 30 years of attending and chairing meetings at, and outside work, haven’t increased the pleasure of them, but fortunately Cambridge can run a good one.

They also put them on in some of the country’s best pubs, with the extra turnover on the evening generally ensuring good quality beer. In the great setting of the Castle (Adnams), Chairman Will managed to cover an impressively varied agenda in 90 minutes (including half-time beer break).

Cambridge is a large, established branch, and roughly 20 members seemed a good turnout which filled the upstairs room. Few beards since you ask, not that it matters.

The core business of the branch is the selection of Beer Guide entries, Pub Awards, pub surveys and keeping contact with publicans, brewers and public.

It was good to see the importance given to WhatPub as a tool for collecting information not just on beer quality via NBSS, but the core details and descriptions about pubs.  Keeping the Beer Guide and WhatPub up-to-date, with licensee help, is clearly vital.

One of the biggest challenges facing rural branches like Cambridge is of actually getting out to all the branch pubs.  This seems to be not just an issue of members finding time to survey all pubs, but the lack of public transport at evenings at weekends.

The large rural area south of Newmarket is particularly poorly served, and of course pubs increasing are restricting lunchtime opening, compounding the problem.

The Branch is doing some sterling work in assisting local communities considering applying for Asset of Community Value status for their pub. Of course communities need to use their pubs regularly to make a case for anyone, including themselves, to take a pub over as a going concern.

An interesting meeting and good evening, though the Adnams beers weren’t the best I’ve had at the Castle (Bitter and Old both NBSS 3); should have stuck to the Broadside.  I did enjoy drinking the Bitter from a straight glass though; Adnams pint glasses are a travesty. 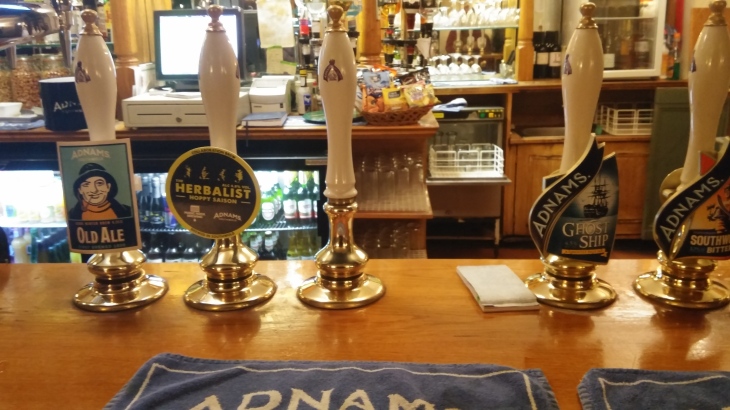 I was reminded again how much work local CAMRA Committee members do voluntarily, and that’s before the main work on the Cambridge Beer Fest starts.

One thought on “CAMRA BRANCH MEETING -AN APPRECIATION”