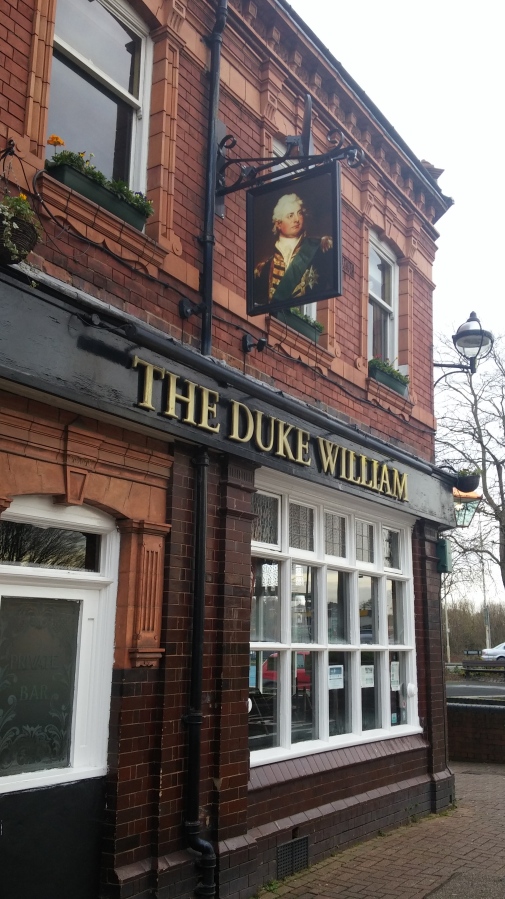 My Top 100 pubs will be places I could recommend without hesitation, particularly if I’ve been able to revisit them in the last six months.  There’s also a tranche of brilliant places with a big question mark over them.  The home-brew Globe in Glossop is one; the Duke William falls into the same category.

I visited the Duke when it made the Beer Guide a few years ago and was won over by the welcome, pubby atmosphere, gorgeous interior and some superb beer (almost certain,y from owners Craddocks).  The only food is a good collection of pies and similar snacks. The opportunity of a return visit partly inspired the Stourbridge trip I wrote about yesterday.

If anything it was even more pub heaven on Friday night.  Its two rooms and an enterprising outside area for smokers were packed, and beers of all descriptions were being served by cheerful staff.  Beer prices are good, but can’t compete with the two Wetherspoons a few minutes away.

Seeing the Lizards wrote a beautiful but sad piece about the demise of pub going here, a thread which Cooking Lager helpfully developed here .

If the Duke was your evidence, you’d think the wet-led pub was thriving with groups and solo drinkers of all shapes and sizes. Other pubs locally were also thriving without food, and I doubt folk were planning on moving on to Dudley’s nightclubs any time soon.

I made two visits on Friday.  On my first, in a busy pub I couldn’t tell the advertised Stout was keg before ordering, which didn’t matter as it was excellent with a touch of Brains Dark about it. I wanted to test the Craddocks cask, so I popped back when there was enough space at the bar to pick a Hop and Glory.

Sadly, it was a disappointment, and given turnover I think I can target the brew rather than cellarmanship.  I left two-thirds and looked longingly at the Bridgnorth options before heading for the curry house.

Like the Globe and its inconsistent home-brew, I’ll give the Duke further chances; it’s a terrific pub.  I’ll also go earlier in the week, to see if it’s true that pub-going really is only a weekend activity now.

4 thoughts on “THE DUKE WILLIAM, STOURBRIDGE”