Last leg of the Kent trip, and a first visit to the poor relation of Medway since a memorable pint in the Conservative Club 4 years ago, which shows how static the town’s Beer Guide entries have been.

Gillingham looks a bit like a scruffy South East London suburb, without the cultural diversity and Antic pubs. The heart was rather ripped out of the economy by the closure of Chatham Dockyard, and I rather doubt World Heritage Status or Dickens World will compensate.  The residential streets were grim and uncared for, a different world from Dover, though with even more kebab shops.

It’s worth looking at Medway on a road map; it sprawls over a vast Potteries-sized area, and my walk from one side (Twydall) to the other (Chatham Docks) took a good hour, and left a vast swathe south of the M2 still unexplored, rather like Wythenshawe is for me.

I was surprised to find some really pleasant country lanes just south of the eastern suburbs, and to be fair Lower Rainham near here has some good weather-boarded pubs locally. It’s the sort of urban walk I enjoy most, particularly in the micro-climate here.

A few attractive houses stood out:- 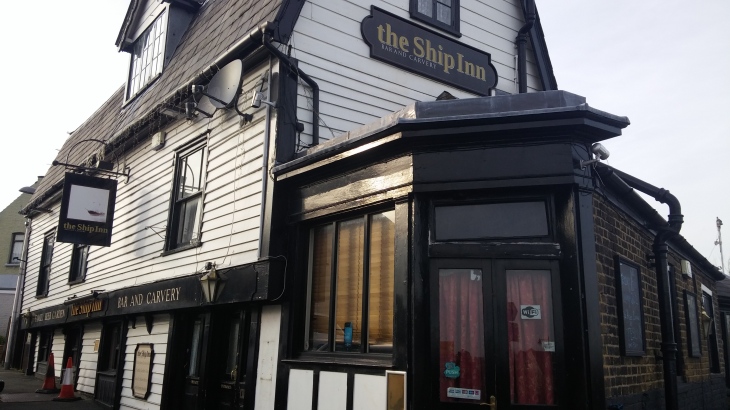 Although its a riverside town, you can’t actually see much see river.  Views of Isle of Grain power stations are an acquired taste.

For many years its offered lower league fans a reliable pre-match back street crawl – Will Adams, Dog & Bone, Frog & Toad and the Barge.  All good free houses meeting the 1974 Beer Guide definition of  a working-man’s pub.  Priestfield Road itself was always a slightly scary experience, even when Brighton were exiled there for a while.

It was always going to be a candidate for a micro-pub or two, with a pub-going culture close to that of Thanet, and plenty of empty buildings.  The newish Past & Present impressed me greatly, both on atmosphere and quality of the Wayland Smith (NBSS 4).  You always get some good chat in a micro-pub, even if you don’t want it, and the discussion on cloud-walkers was worth the £1.50 for a half alone.  Is £3 a pint fixed by Martyn Hillier ?

I took a look at The Barge (closed lunchtime) for old times sake; it is the only pub where I have been attacked by a sheep, which was still safer than Paul’s kebabs on the Strand.

Gillingham isn’t getting gentrified any time soon.  A Wetherspoon would do wonders, as it has done in Sittingbourne and Sheerness.  The new Premier Inn at the small marina is a good sign.

9 thoughts on “GILLINGHAM – A FEW POSITIVES”