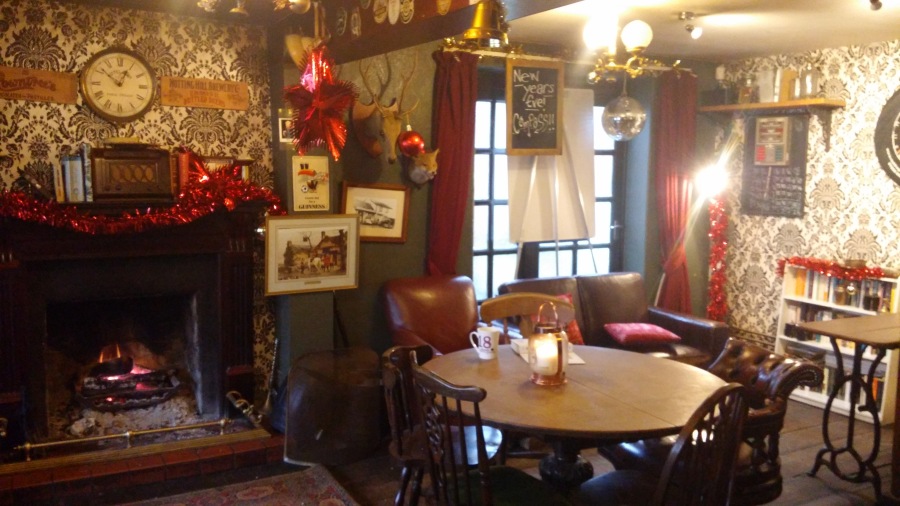 My last new Guide pub in Suffolk didn’t offer much in the way of walking, partly because of torrential rain and partly because it’s in the large area of nothingness between Stowmarket and Diss (think Leigh to Lymm but duller).

When folk tell me how lovely Suffolk is, I assume they’ve only ever been to the Waveney coast, or saw “East of Ipswich” on the telly once.  The A143 from the  t’other Bury into Norfolk is 15 miles of independent petrol stations, cabbage fields, boarded up pubs and traffic-worn housing.

All the lovely buildings are south of here (e.g. Lavenham and Bildeston).  Only Ixworth Abbey is worth a stop, and it’s unlikely that, on my deathbed, I’ll regret missing Henry Watson’s Potteries, whose sign I’ve been passing for 25 years.

The only other bright spot is the connected villages of Rickinghall and Botesford – they seem pretty much continuous. Plenty of brightly coloured houses and some decent pubs, with a slight slope down the High Street. 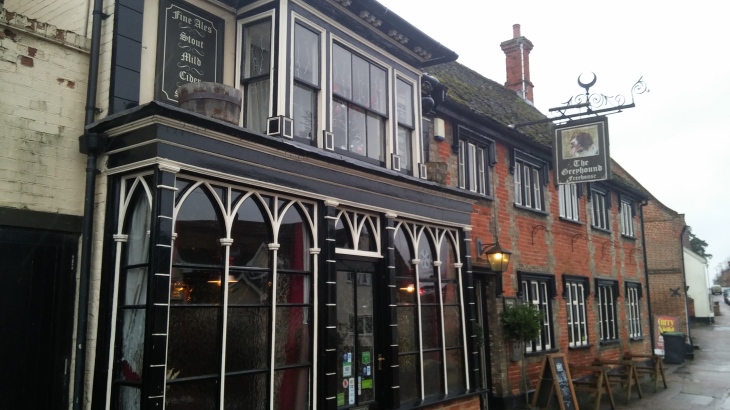 The Greyhound has a classic, if busy interior.  Not quite Kings Head Laxfield classic, but a winning combination of barrels in the bar, attractive seating and paraphernalia.  Beer on gravity isn’t to everyone’s tastes, but suits me and is more common in Suffolk than in most counties.

I was the only customer; tellingly the pub wasn’t doing any food in the post-Christmas wind-down, and as we know that’s why villagers go to pubs now.  My half of Greene King IPA was improved by gravity serve, but would have been even better with some more  turnover (NBSS 3).  Drinking Wherry in Suffolk would have been some sort of sin.

It’s a shame it was so quiet, as it looked a terrific gathering place for villagers, with diners in a separate but equally welcoming room.

A quick walk around Stowupland and I was done with Suffolk for another year. Bury gets better, the rural villages continue to lose pubs, and the Dove (Bury) and Royal William (Stowmarket) seem unchallenged on beer quality.