There was one other pub I revisited in Kentish Town last Sunday.  It got a bit lost among a cluster of gems ( but deserves it’s own post.  It’s hidden just off the main Fortess Road, in one of those streets straight out of Mary Poppins.

The Pineapple is one of the country’s most beautiful mid-Victorian pubs,  immaculately preserved but strictly a boozer, which is the word that pops up most regularly on Beer in the Evening reviews.

National Heritage listing protected it early in this century, and their description is spot-on. “An unusually exuberant example of a mid-Victorian pub serving a newly-built development of suburban housing, which, in spite of internal alteration, retains a fine behind-bar screen.”

It’s quite unusual to be at the bar the moment you step in the door, and the sight of regulars taking up all the bar space is something I find offputting.  Here though, I was given space and immediately made welcome by Louis from Donegal, despite my failed attempt to get him to convert from his Guinness to my Stod Fold Dark (NBSS 3.5).

Most of the seating is behind the bar area, and despite the promise/threat of Thai food, all I saw was exuberant drinking and chatting; which is all you need.

The photo of the bar (courtesy of PubsAndBeers) must be a few years old, as there was no Bass on, which is what the Pineapple was renowned for in the ’90s, alongside it’s Bass mirrors.

20 years ago good Bass would have been enough for regular and visitors, but the relentless clamour for a variety of guests has seen Bass lose it’s dominant position in pubs from the Dolphin to the Pineapple to the Flowerpot. 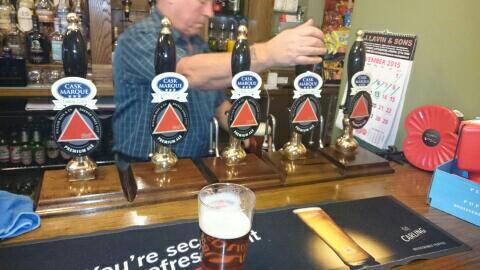