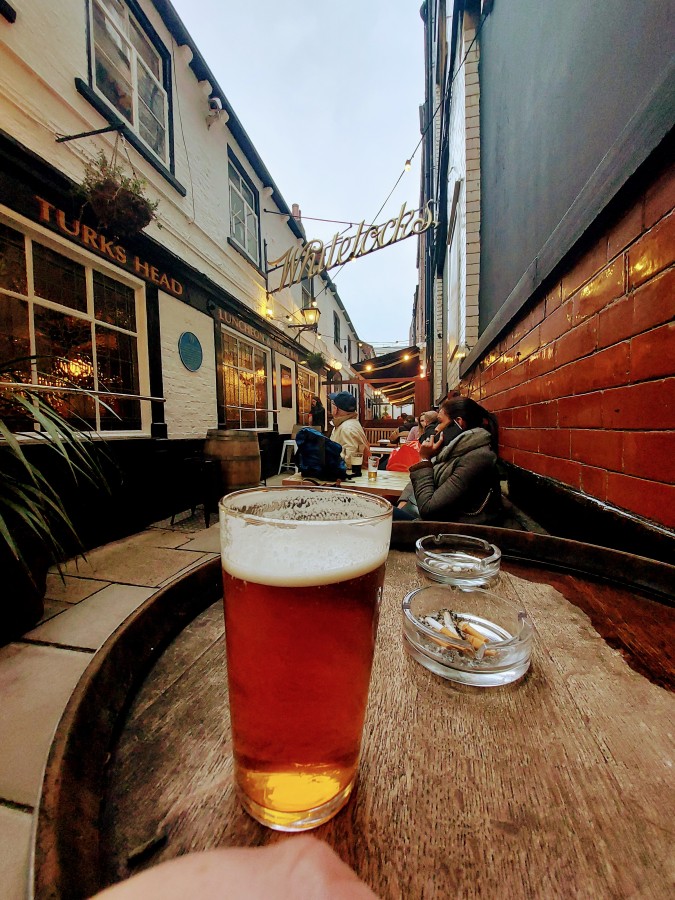 I mentioned yesterday the problem with rail travel, the urge it creates to fill in time between trains with a rushed extra pub visit (See: BRAPA, every Saturday night).

And so it was on the way back from Harrogate to Sheffield that I found myself having to kill 44 minutes in Leeds without an obvious pre-emptive in sight. What’s going on ? It feels like almost a month since Head of Steam last opened a new pub.

Leeds, like its bigger cousins in Manchester and Sheffield, seems to be getting busier by the day, even if the trade is more hospitality than retail. A good thing, surely ?

I delved into the heart of the Leeds retail centre, noting with delight the closure of the United shop, and stopped to admire Briggate’s display of aerial photos of the UK.

This photo shows a classic piece of UK industry, probably a craft brewery, but which one ?

It’s three years since a group of Old Codgers (and two Americans) led by the legendary Mr Coldwell visited Whitelocks, and I’m pleased to say they’ve improved the signage since 1715, which was 301 years before the introduction of VAR.

The problem with Whitelocks is that it’s too photogenic. A dozen photos per post and a few words about mobility scooters, lacings and 1980s pop is all people want to read.

But look at this (I know most of you have already been there);

Boak & Bailey were discussing Whitelocks last month (here) and its status as a timeless institution,

“Every UK city ought to be able to support at least one. You know – the pub you recommend to everyone.”

Whitelocks is exactly the sort of place everyone goes to, and feels comfortable in. Not a museum piece at all, and very pubby.

Something for everyone on the beer list, perhaps even a little less crafty than before ?

Yes, I really did. My fourth Tim Taylor and second Landlord of the afternoon.

Blimey, another easy-drinking 3.5, perhaps a bit more bitter than at the Tap, but enough to convince me all those dull pints of Landlord, like Pride and Harvey’s are the problem of the pub not the brewery.

But you knew that, right ?