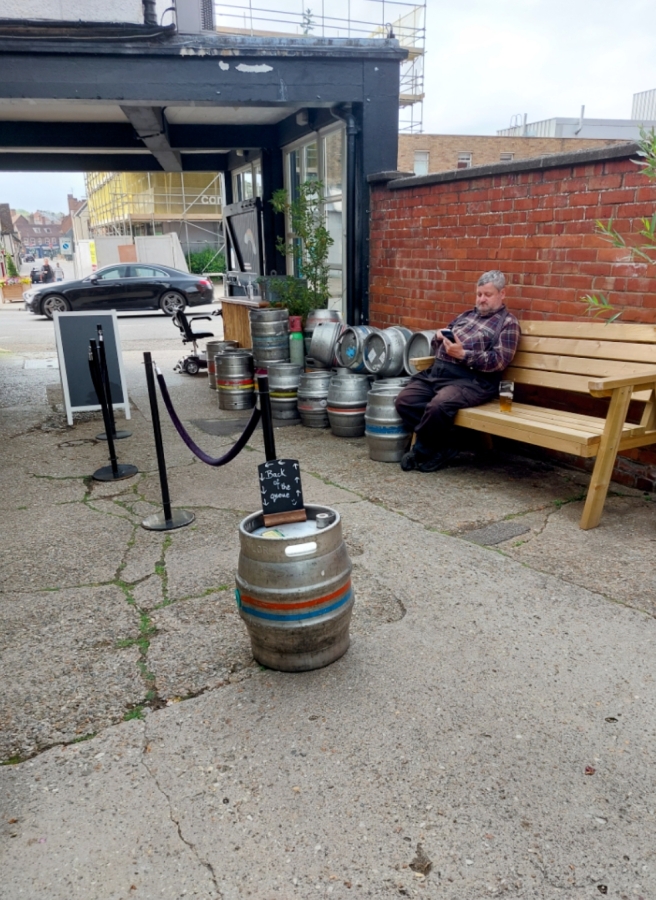 Hitchin John is always great company, and the only thing I can say against him is that he lives in Hitchin, which never has new GBG entries. He should move to Stockton-on-Tees and we could meet up every month.

Still, despite the thrill of the tick it’s always nice to pop back and do a revisit, particularly when it’s a pub like Hitchin’s Half Moon that has acquired cult status since we left town.

Back in 2000 this was the place you played doms and drunk exciting beers like Adnams and Youngs in good condition, and, er, that’s it.

But it seems to have become the solid cask pub, the equivalent of the Olde Cottage in Chesteror the Blue Bell in York, not that Hitchin has much competition.

Freedom Day had come, but there were still notices to read and boards to walk into clumsily.

I walked into the public bar,

but Mrs RM was having none of it and raced up a hill the steepness of the one leading to our Sheffield abode.

Which left me to negotiate the rules for getting beer (order at one window, pay with card, join a queue to collect beers from a second window). As Mrs RM will tell you, I don’t do rules.

Quite a nice beer board with some beers you’ll know.

After mucking about with halves of Pale Four, Firefly and Citra we moved onto pints and left John to sip halves. He was meeting BRAPA in Hertford last Saturday and I was able to give him some essential survival advice.

All the beer (even the halves) was cool and chewy, 3.5 stuff, and the giant sloping garden was as busy as I’d seen all summer so they’re doing something right.

They even had a party in what looked like a smoking shelter but probably has a posh name.

Yes, I know what you’re thinking.

5 thoughts on “DOING IT IN HALVES”