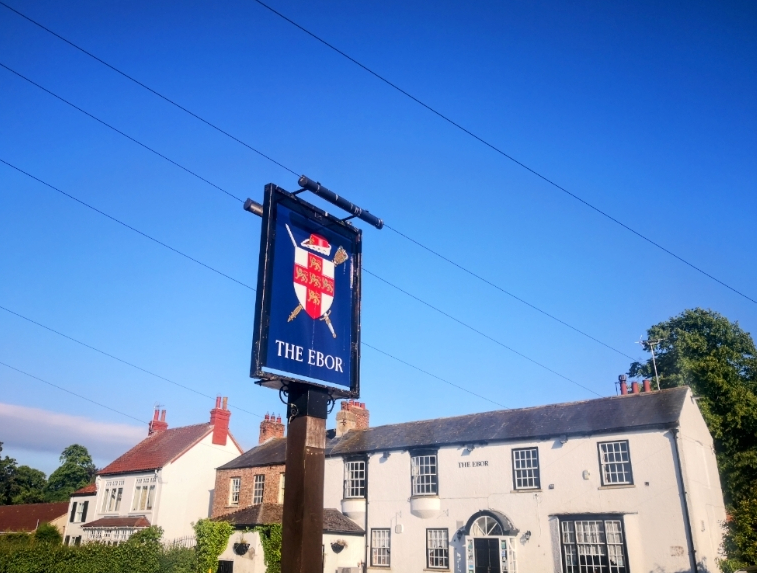 The blue skies were back when I made my next venture forth into the nether regions of North Yorkshire;

Bishopthorpe (pop. 3,237) may well be equidistant between Chez BRAPA and Chez Daddy BRAPA, and has enough pub and pomp for either of them. Plans to convert the Archbishop’s Palace to a Brunning & Price/True North collaboration pop-up are at an embryonic stage.

and the second Sam Smiths in a row to be awaiting Sir Humphrey’s decision on new tenants.

Like Si, I thought the Ebor was a classic when I visited.

It’s always hard to know what to make of Sports & Social Clubs, which now make up 27.1% of new GBG entries each year (actually, that’s true), but once you’ve completed the 5 minute walk through the car park at the front (front car parks are a Yorkshire specialty), it looks great.

A bloke at the outside table tells me not to wave my phone at the bar code over his head, “There’s an easier one in there mate” and I take it as a veiled threat. I’ve missed veil threat these last 15 months.

I’d have been disappointed if Simon hadn’t been here before, and reading his report from November I note the same hubbub, deluded Leeds fans and “cheeky bantz with barmaids”.

Si’s photos are now better than mine, as he invested his Cauliflower Marketing Board money in a decent camera.

But, Mr BRAPA, I got REAL ALE, not that bottled rubbish. Not quite the John Smiths Cask the GBG promised, but the Rudgate Ruby I chose at the bar (hurrah !) was a decent substitute, I think you’ll agree. Cool, rick, smooth, NBSS 4.

Paying for it was a tougher affair, as with my vision clouded by my mask I spilled cough sweets, coins and dignity over the floor. No-one cared; they were glued to the muted North Macedonia v Austria (I jest).

“Ere, when they replaying that Danish game ?”

“They’ve played it ! The bloke who had the cardiac told them to“

It was a like being in Southend, not posh York, and much the better for it.

I left just before the Austrians cruelly crushed the Maccadonian dream.

One thought on “MACCADONIA THE GREAT IN BISHOPTHORPE”