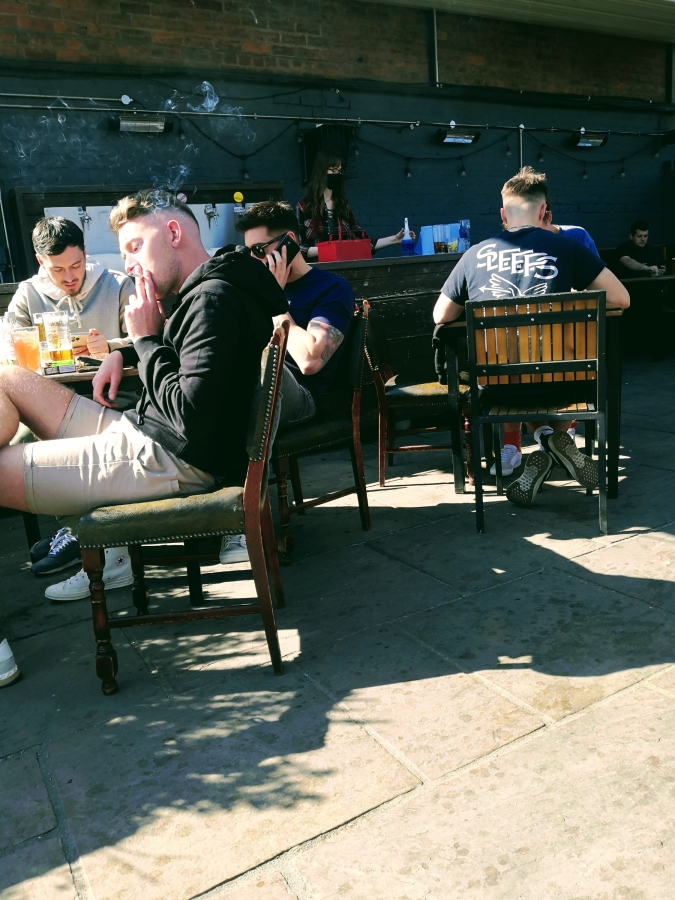 ALL THE PUBS IN SHEFFIELD ON FOOT No. 7 – The Riverside (Kelham Island)

On Monday (I’m already that far behind) we popped into “town” to walk off the 455 calories we’d inevitably put back on in the pub later.

Pleasingly the Cathedral hasn’t yet been converted to a Brunning & Price, and will therefore be able to resume its original role as a tourist attraction for Japanese visitors shortly.

Sheffield is the centre of the sporting world this week, as household names like Ronnie O’Sullivan, Junhui Ding and Bingtao Yan battle it out to see who can be first into the bio-secure bubble at the Crucible.

You have to produce a negative test to get in, so I’ll wait till next year, thanks.

Opposite the Crucible the Head of Steam‘s beer garden was filling up and I really fancies and Old Peculier, but I’ve had enough of plastic glasses, and embarrassed Mrs RM by walking away when I saw it was plastic or nothing.

This trip was notable for my first visit to a non-essential shop since March 2020, as I broke free of Mrs RM’s clutches and bought a £20 pair of jeans from NEXT. On my own. I like NEXT as their jeans are labelled with waist and leg sizes rather than “skinny”, “slim” and “bootfit” like in H & M.

That probably shows how old I am, despite my cutting-edge music tastes, and not the sort of custom Kelham Island’s Riverside needs.

Simon was mentioning this as the pub that ALWAYS seems busy when he visits Sheffield, and the pub we most expected to be heaving when gardens opened their, er, doors.

Because although it has some of the best Wards windows in town, and invites you to “Book a party”, it’s the seats by the Don that you queue for, even at 3pm on a grey Monday.

Mrs RM wasn’t even drunk (yet) but wanted me to take a shot of the nice man who looked like Jack Sparrow and wanted to know who made my glasses. I tell you now, I’m not the sort of blogger who takes surreptitious photos of pub staff, oh no.

I can’t fault the Riverside really; it does what you want it to do better than Brew Dog and with the bonus of cask ale.

Actually, the cask isn’t the highlight, though the Jaipur was good enough; it was just that these days the kidz drink Old Mout , Pravha and Guinness. Mrs RM had a double G & T with Leeds gin. Leeds !

With a soundtrack of Amy Winehouse, the Killers and “Girls Just Want To Have Fun” (stop singing Mrs RM) and that horrific Scissor Sisters cover of the dull Pink Floyd track you could have been in an All Bar One in Maidenhead in 2006, and let me tell you you don’t want to be there.

But we’d stayed for 3 beers, and some halloumi, and life all made perfect sense. Just this once.

5 thoughts on “PACKED PUB GARDENS BY THE DON”