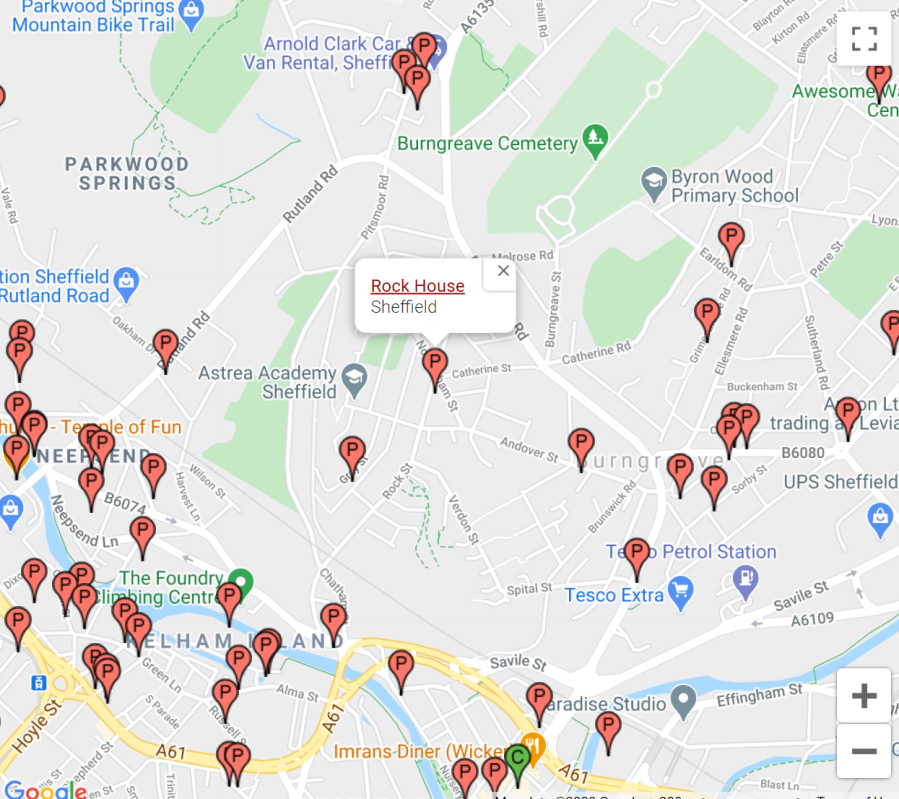 Another break from the 2020 Review before we reach September, which for me could be renamed “Dorset”.

I’ve got plenty more urban walks and closed pubs from Tier 3 Hell to bring you, though whether there’s enough suburbs of Barnsley and Mexborough to string out this blog till we’re all vaccinated is quite another matter.

For 2 weeks we’d been staring from our front door at the wild expanse of Parkwood Springs, aka “that bit with the ski slope that keeps burning down“, and wondering what lay beyond. If anything.

That’s why I’m here for you, to explore dangerous areas like Woodside and Pitsmoor.

Actually, it’s a bit tame, with Rutland Road being the main route to the Northern General and the undoubted charms of Leslie’s Lingerie in High Wincobank (report to follow).

You’ll remember The Forest, a wonderfully basic pub on the edge of the red light industrial district.

Then you mysteriously reach the ridge of the parkland, and move into the great urban spread of Pitsmoor.

I’m immediately won over by the Finding Nemo exhibition of Just for Kidz Nursery, despite a) their calling children “kids” and b) not even spelling “kids” correctly.

A quick look at Pitsmoor (aka Woodside aka north Burngreave) shows me a wealth of pubs. Unfortunately most of them are long closed,

either for conversion to an attractive world food store named after a Shropshire brew pub,

or to a shisha bar,

or due to a licensing misunderstanding that I hope will eventually be resolved as The Pitsmoor has lovely windows.

Which leaves the gorgeously long Bay Horse with the promise of Tetley Bitter.

There’s some solid housing in Pitsmoor, which only looked a bit sad due to street after street of overflowing rubbish bins; Birmingham will know all about that.

Climb above rambling Burngreave cemetery for the pastoral views,

head up hilly Rock Street to remind yourself that this was a challenging GBG tick 20 years ago,

and then head down through Wicker for a curry at the Arabian Kitchen.

Tell ’em I sent you. I’m the one who turned down the sugary tea.

5 thoughts on “A PITSMOOR PERAMBULATION”