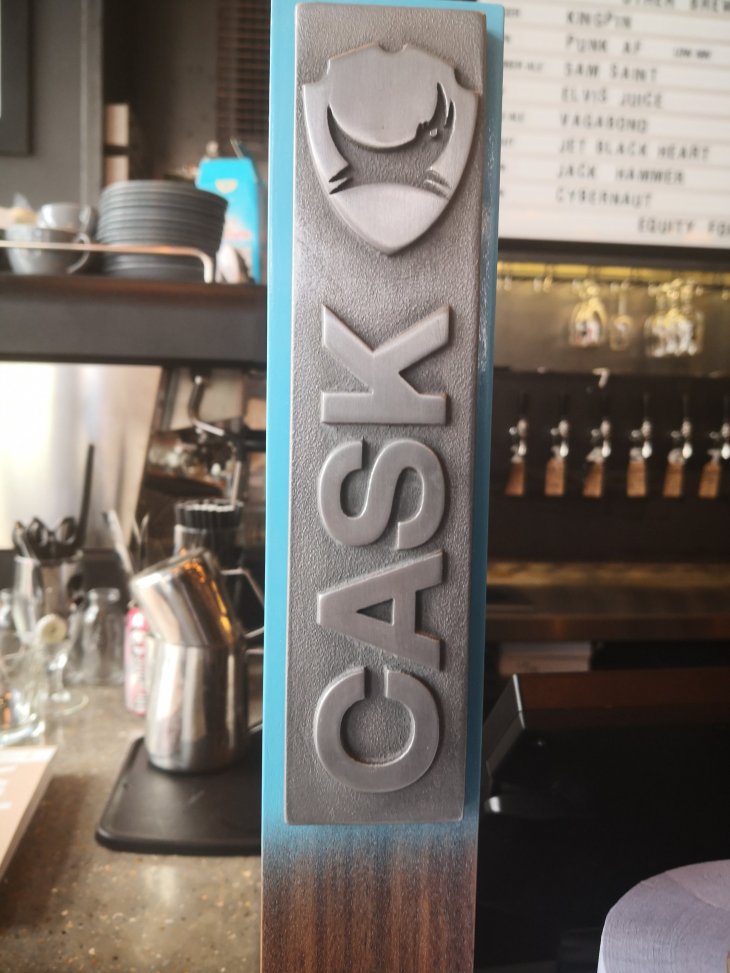 Misleading advertising already. There is no cask at the week old, long-awaited Cambridge BrewDog.

The Nine to Five Wizard sold on the Saturday it came in, or so a delightfully cheery barman told me.  That sort of occasional cask availability won’t get BrewDog in the Beer Guide, and I bet the BDs are devastated about that.

Actually this was just an excuse to get James out of the house in between shifts at Pizza Hut. He’s back at Sheffield Uni next week so he needs feeding up.

James knows about as much about beer as I did at 20, though then it was a choice of Greene King IPA or Snakebite.

At 20 he can appreciate the styling, and the quality of service, and the video games.

But he’s here because BrewDog run a good diner.  Like 5 Guys with craft.  They’d hate that description.

I had the spicy salad, washed down with the non-alcoholic Punk IPA, which is at least better than Nanny State, and a Cherry Sour from Connecticut Valley, because #IamCraft.

Three days in, it was interesting to observe the lunch-time custom.

A chap wearing a leather jacket and not much else came in and asked if they did stout.  He was recommended the 9.5% Russian Imperial Stout.  He seemed to have about a tenner’s worth of tasters before slipping out. I’ve never seen so many folk asking for tasters. Is this what the world has come to ?

Anyway, magnificent food, setting us up for the cultural bit.

Yes, the tower of St. Mary’s, the college church.

There’s not many places you can climb in Cambridgeshire, one of my main problems with the place, and James had never been up here before.

It’s not Cologne or Ulm, two of many German towers we’ve climbed, but it’ll do.

Not many Cambridge students and residents climb the tower, I think. It’s quite steep.

Unlike the 1830’s, when Cambridge undergraduates in their hundreds stopped halfway to leave some very elegant graffiti in the wood.

Along with the anatomical clock, the Blue, and a Mill Road kebab, this should be on everyone’s Cambridge schedule.

NB Ideas for towers we can climb, before or after a BrewDog burger, more than welcome.

7 thoughts on “RING OUT THE BELLS ! CAMBRIDGE GETS ITS BREWDOG”