I’m really getting into dangerous territory here, criticising beer quality in Scotland.  But I’m not alone. And while local branches feel (understandably) unable to comment on quality, instead counting the pumps*, I have no such restrictions.

Next stop, East Linton’s Steakhouse, providing a rare relief from the beer desert along the A1 into Edinburgh.

Another impressive Lothian village, allegedly the stand-in location for the film “Violet and Victor in Victoria Falls” in the 1930s.

In true 1930s Swallows & Amazons style, the flat rocks at the foot of the falls are occupied by schoolchildren on their fag break.  Have schools broken up already in Scotland ? 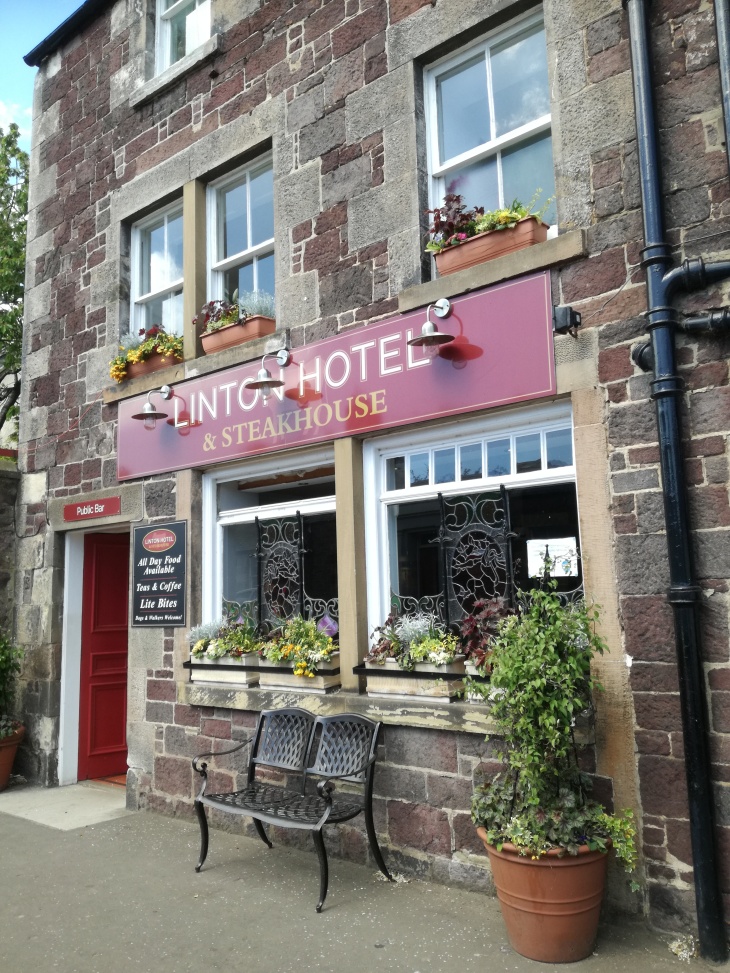 The Public Bar delivers the goods though.

They even had a commemorative porcelain model of Old Mudgie and T’other Mudge.

The What Pub entry screams “3 changing beers. At least one from a Scottish micro”.

Mrs RM had given me an indulgence allowing me to buy the Foxy Blonde with a clear conscience, and anyway it’s about foxes, not sexism.

The pub’s children said “hello”, but wishing to avoid being asked what I thought of the beer I went up the stairs to the beer garden.

Yes, upstairs. As were the village’s total supply of retired gentlefolk, keeping the pub going with the Classic Afternoon Tea. None of them were drinking the beer from the Borders. Or Northumberland.

And that’s the problem.  This is a lovely pub, catering for the whole village.  If I’d had Tennents and a scotch pie I’d have been happy. But once you chase the waterfalls of cask beer perfection you run the risk of idiots like me drinking it on a hot Tuesday lunchtime.

So I had warm Lucozade in a handled glass and dreamed of Musselburgh.

*I highly recommend the Boak & Bailey post today, and not just because it quotes me.