An emotional trip to Coatbridge, which as a child I thought was called Albion.

In the late ’70s I collected football programmes, largely from the legendary Steve Earl of Bungay.  On my 13th birthday I was allowed to visit Steve’s stockroom on the way back from Southwold; I’m not sure Steve was that pleased by an unannounced personal visit, mind you.

From Steve’s Aladdin’s Cave I picked up a Scottish Bundle (25 programmes for a quid), including this colourful edition from Albion Rovers, and immediately adopted them as my Scottish team, alongside Cambridge United, with Manchester City as my other foreign team. 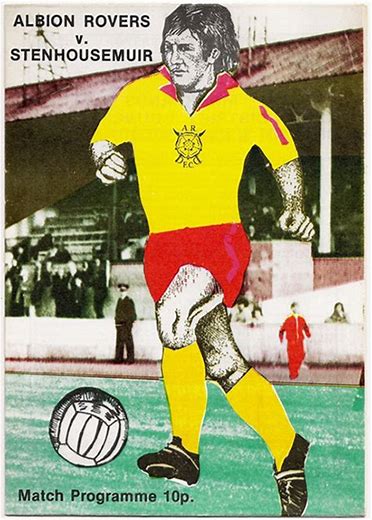 I think you’ll agree that Albion looked very exotic, and their programme contained fascinating articles on, er, other football programmes.

Rovers are the Rochdale of Scotland, a century of near mediocrity followed by a few stellar seasons recently, although they lack the (infamous) celebrity fans that have graced Spotland.  I think we can safely say that Cliftonville is no Spotland, though I quite like its uncluttered frontage.

I’ve been to Coatbridge before, on a day trip from Cumbernauld, specifically to tick the St. Andrews Bar when it was a bit of a classic alehouse.  It’s still the only real ale outlet in town, apart from the Spoons, which was my next stop after Drygate.

I’m sure you’ll agree it takes a singular type of person to visit Coatbridge on a wet Monday in May.  I am that person.

The train out to Sunnyside takes twenty minutes, rattling past the giant housing estates at Shettleston and Easterhouse. Coatbridge feels a bit greener through the ferns of Drumpellier, though its big draw is the Industrial Heritage museum, allegedly noisier than Magna.

If Coatbridge had a tourist postcard (and even Cumbernauld does) it would include a fair bit of stern architecture on the way from station to High Street.

But the pedestrianised shopping area is, I’m afraid, in the South Hylton class.

That said, there’s some very Scottish shops here on the way to The Vulcan.

And I guess the best thing I can say about this Spoons is that it has a dramatic setting.  Those flats really are impressive.

A decent (read: ambitious) range of “Available Soon” and guest beers here, so I asked the very pleasant barman “Which one is selling fastest ?“.

The look of horror said it all.  Before I could add “OK, what’s sold at all today ?“, he offered the St Giles from Stewart, adding “You enjoy it” as I handed over £1.49 in pennies.

I did enjoy it, lack of trade notwithstanding, a cool and tasty NBSS 3. In the 20 minutes I was there the Vulcan sold as many pints of cask as they did quinoa salads. It wasn’t busy, but it was pleasant and cheery.

Not my best photos (I was a bit hyper by this stage), and not my best note taking either. Those scribbles say “Two old boys growling about nothing” and “the sound of maracas coming from the kitchen“.

Wikipedia notes the influence of the Irish influx on the locals accent, which is my excuse for not hearing a single word.  To be fair, the barman had asked if anyone in the pub could translate Fens, without success.

Wait till you see how much pink penning this allows me to do in the Glasgow section of the GBG.

Pubmeister Duncan assures me there is top class football well into June in Scotland; sadly I’ve never been able to make a trip to Glasgow coincide with an Albion game.  Perhaps July…

10 thoughts on “THE SUNNYSIDE OF COATBRIDGE”