You may have noticed the absence of a curry on Stourport Curry night, caused by a catch-up with a colleague in a neighbouring village without an Indian restaurant.  That’s how backward parts of Worcestershire are, folks.

Even worse, Fernhill Heath is in a bit of a Good Beer Guide desert (not quite the same as the real ale deserts of Lanarkshire, but still).  The Mug House at Claines used to be the GBG regular, but these days the nearest entry is in in central Worcester or Droitwich.

At least there’s still two pubs in this smart  but nondescript village, and the White Hart looked quite pubby in the usual casual dining way.

Despite looking empty, virtually every table was reserved for dining.  On a Monday in March.  Interrogation of the bubbly barmaid revealed that a lot of folk would be popping in after a hunt, which at least promised a lively evening.  We’d ordered drinks already so contemplated an alternative place for tea. Perhaps the Subway in the local Spar.

We found a sofa placed at just the wrong angle to see what was going on at Stamford Bridge. The Sky commentary was just about winning the noise battle with a soundtrack of Demi Roussos.  Regular readers may guess what I feel about the merits of football and piped music competing for attention in quiet pubs.

Charles had just declared the Wye Valley “meh !” (I made the right choice to be DES), when the bubbly barmaid started a military operation to get us the table we’d given up on.  It was all very proactive, and the announcement of “Pie Night” made ordering simple.

My steak and stilton pie arrived just as The Three Degrees greeted the Ander Herrera sending off on the small screen with “When will I see you again ?”.  It looked a bit like this; 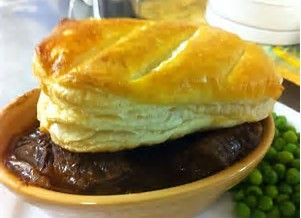 Now I know that’s not a proper pie , but to be fair there was more than £6.50 of pretty gorgeous meat hiding under the shell.  Better off without the lid at all.

We waited to see the pub fill up with folk in hunting attire, or at the very least see a fox run though the pub, but by 8pm it was just packed with pie-munching OAPs. It was good to see a pub so busy, even if it wasn’t having much impact on beer quality; Charles’s Spitfire didn’t taste like Spitfire, apparently.

So busy was the White Hart, that as we left we saw our bubbly barmaid crossing the road to procure more wine from the Bull, a Banks wine-bar of a pub that was virtually deserted.

Pies, prosecco and pub quizzes, that’s how to pack them in. Not 11 pumps.

NB The other big clue to the White Hart’s audience is the sweets cabinet.  About 28,000 calories in the picture below, and I know from my parents the call of the pudding.