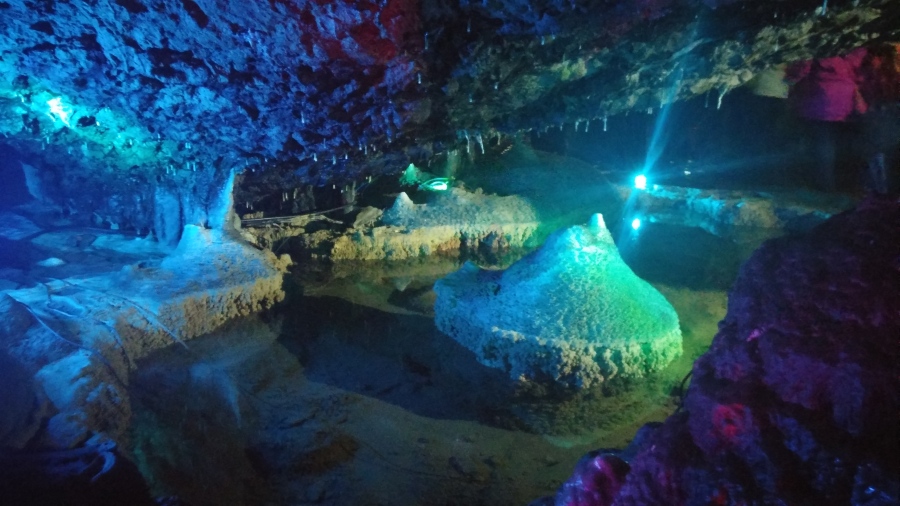 I’m really enjoying exploring Somerset this year, having largely bypassed it (literally) until now. Today, with some morning showers damping down hopes of a trek over Cheddar, we took some friends to Wookey Hole, a name I thought was made up till our first visit.

Wookey Hole is a commercialised series of show caves just north of Wells, which has a number of quirky attractions loosely linked to its paper mill past. A group of us, teenage lads and oldies, enjoyed a good day out. The caves themselves are spectacular, on a par with Dan Yr Ogof in Mid Wales.

I’m afraid my boys were much more interested in the penny arcade collection, as good in its way as Brighton Pier’s museum, which included a set of execution displays you just don’t expect to see anymore.

I’m impressed at the width of the displays at Wookey, which include a superb clown collection as well as great tat. It’s a shame the Wookey Hole pub seems to have lost some of its appeal.

The walks from Wookey Hole into the hills near Priddy were stretching but rewarding as the rain cleared. I finally made it to the Hunters Lodge, an unchanging gem with Butcombe (NBSS 3) from the barrel, gorgeous wood panelling and a menu from the ’70s.

This part of Somerset does have a fair number of timeless gems, including those at Huish Episcopi, Priddy and Turner’s Grave. More tomorrow.