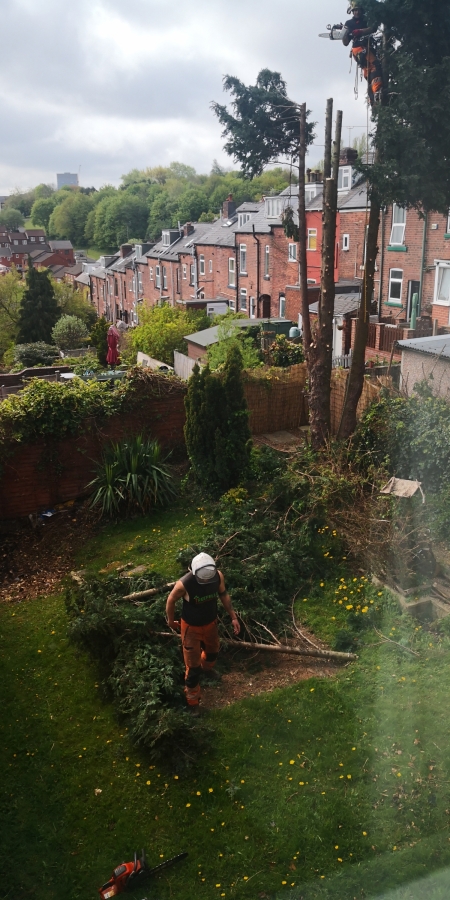 A week after electing the Greens into the Council on a “Chop No Trees” mandate, we chopped down the giant leylandii (fir tree to you and me) towering over the house before it fell over and crushed Baa Baa Toure to death.

Regular readers will remember that trees nearly scuppered our house move last November, so we’re taking no chances with the little terrors.

Here’s a topical song about trees from your post-punk favourites And Also The Trees, the best thing to come out of Inkberrow, Worcs, since Duncan Mackay did a pre-emptive tick in the Old Bull in 2009.

Two chaps turned up on our doorstep at 07:52. Mrs RM wasn’t expecting them till rather later. One of the notable things about Sheffield tradesmen is that they ALL arrive earlier than planned while you’re still in you’re pyjamas.

They got straight to work, chopping down the high branches and converting them into sawdust that will later be used in lieu of barley in a range of Donnington beers.

I left them to it, walking into Hillsborough to see how Spoons are getting on with the refurb of the Rawson Spring.

Quite why they couldn’t have refurbished in time for the Glorious 12th I’ll never know, the beer garden is enormous, but it’s a candidate for my first pint on The Heaventeenth (tomorrow).

Talking of early ’80s Sheffield popsters, note the contents of that skip. Sunday roast club advert, lone shoe belonging to Susan Sulley of the Human League in 1980, and 3,000 cans of out-of-date Sixpoint Resin.

I nipped back in B & M Bargains, Sheffield’s premier craft can outlet, for these two big boys (as the kidz say). There’s a blog post called “The Faxe, the full Faxe, and nothing but the Faxe” in preparation.

When I got back, the tree choppers had already finished. AND CLEARED UP. Treefellas Aboriculture, I salute you.

18 thoughts on “AND ALSO THE TREES”